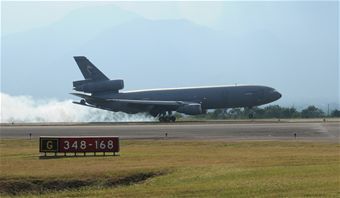 Joint BaseMcGuire-Dix-Lakehurst was formed in 2009 due to the 2005 base realignment andclosure bill. It is a combination of McGuire Air Force Base, Fort Dix, andNaval Air Engineering Station Lakehurst, but the entire joint base is currentlyunder the jurisdiction of the US Army Reserve Command. The host unit at JB MDLis the US Air Force 87th Air Base Wing; they provide installationmanagement to all of the Joint Base which spans two New Jersey counties andmore than 20 miles. McGuire Air Force Base originated in 1941 and grew famousas the center of the Air Force's global mobility. Fort Dix was established in1917 and has a history of mobilizing, training and demobilizing soldiers fromas early as WWI through today. NAES Lakehurst began as a munitions testing sitefor the Russian Army and was then obtained by the US during WWII. Despite thechange, each of the three bases is still commonly referred to as their originalbase names, rather than the joint base name. The base is home to more than 80mission partners and 40 mission commanders.

The nexttime you find yourself moving away from your current base, whether it's one ofthe three at Joint Base MDL or somewhere else, you can find storage quickly andeasily. We've compiled a variety of storage facilities conveniently located by JBMDL and show you the prices, availability, pictures, and contact informationthat will all help make your decision easier and your move even faster.