You think this is your typical news story. A mysterious odor wafted from a Lodi, California storage facility and neighboring communities complained of the strong smell. Once notified of the complaint, the storage facility owner called the local police. Soon after, the local police showed up with an authorized search warrant and opened the unit in question. At first, police thought they had found crystal methamphetamine, but later ruled that it was crystal deodorizer. 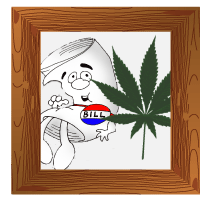 Case closed? I think not. Among the deodorizer, 50 marijuana plants were found. Now, I know what you’re thinking. The police confiscated the illegal substance and the owners of the unit were arrested for being in possession of an illegal substance. Think again Holmes. Because the owners of the unit were caregivers to a woman (their wife and mother respectively) suffering from lupus and glaucoma, nothing was confiscated, no one was arrested and the police returned to an ordinary day of work. What? We’re all free to smoke weed? That’s exactly what I thought. So I did a bit of research. First we need to remember we’re talking about the state of California, which currently is fighting a little battle over the legalization of marijuana. Currently, under the Compassionate Use Act of 1996, the law, “prohibits any physician from being punished, or denied, any right or privilege for having recommended marijuana to a patient for medical reasons.” It further goes onto to state that local law enforcement cannot make unlawful the possession or growth of weed for a patient or their caregivers. That may be all fine and dandy, but couldn’t some Joe on the street be all, “I’m in pain. My doctor prescribed this for me, so leave me alone, Mr. Police Officer.” In early 2003, the California State Senate addressed the loopholes in the 1996 Act. Now, the passed proposed bill stipulates the issuance of identification cards for those who qualify for the program (MMP, the Medical Marijuana Program), creates a state-mandated local programming, and puts the Attorney General as the authority over the MMP if any issues arise. So what does this all mean? As of now, despite a moratorium on the current laws, as long as you are in possession of the correct identification card allowing you to grow, possess, and take marijuana for medical purposes as prescribed by your doctor, then you are OK to go ahead and use that awesome storage facility you found on StorageFront.com to house your marijuana. If you don’t have the card, or live outside the 14 states with medical marijuana programs, then well, the police have every right to confiscate your illegal goods and face the appropriate ramifications of your actions. The 14 US states include: The next time you’re about to put something questionable in your storage facility, either know your rights and where you fall within the law, or simply, don’t do it!
AUTHOR
Mia Iverson
Send Message