I moved this spring. I had 16 weeks to plan my move, and from the beginning of March until the end of April with both places so I didn’t need to rush. On April 26th I was relaxing at my house, still only about 10% moved in. I had my bed and some other furniture, the clothes I had needed up to that point, and the bare minimum of kitchenware. Knowing I had plenty of time to move only made me put off the inevitable as long as possible – I had moved six times in five years, and was over the whole experience after the third time. This led to some of the most frantic days I can remember, struggling to get the rest of my belongings from my apartment to my house using only my two-door car. What follows is the totally non-hyperbolic tale of The Great April Move of 2013. My first mistake was deciding what equipment I would need from the comfort of my new home. I was convinced that there were only a few items worth keeping at my apartment, and two plastic bins and my car would be more than enough to facilitate the move. Imagine my surprise when I realized I easily had a moving truck full of belongings that I definitely wanted to keep once I got on site. Now imagine the stubbornness that still kept me from renting a truck or acquiring more boxes. I was making 4-6 trips, twenty minutes each way from my apartment to my house. I would pack the two bins I brought with me, and take whatever larger items I could fit in my car. All of this while traveling on the worlds slowest and smallest elevator; it was taking roughly forever to get from the 10th floor down to the lobby and out to my car. Then after a most frustrating game of car-Tetris, I would drive to my house to unload, and the process would start over again. 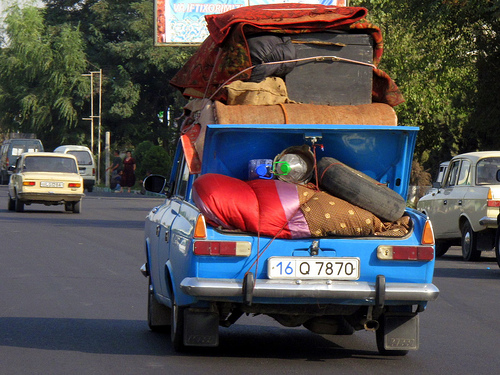 Tip Number 1: Always have the proper supplies and transportation.

Make sure you have enough boxes to hold your belongings, and look into renting a moving truck. Get a moving truck. Seriously. Now, it’s not like I had no help, it’s just that the vast majority of the time I let machismo get in the way. Sure, my friends had offered their services, but early on I had told them I just had a few things left, and it was going to take no time at all. Oh, was I wrong. I spent the better part of five days paying for my hubris, both physically and mentally. There’s no feeling quite like the one you get after the first two days of organizing, packing, and moving when you look around and think “What have I been doing for the last 48 hours? It looks worse than it did two days ago!” Luckily that panic gives you extra energy to worry about your deadline while still refusing help.

Tip Number 2: Get the help you need.

Whether this means friends and family or a professional moving service, everything will be much less stressful if you know when to admit defeat. Oversentimentality was my worst enemy (besides massive piles of books, seriously how are books so heavy?) – I was basically unable to part with anything I had acquired over my stay in my apartment. Or, you know, any of the junk that had accumulated over the last five years. According to my sources* this increased my overall moving time by over 3,000%, which led to more clutter I had to get rid of in my house - but that is a story for another day. *I don’t actually have sources, but seriously, so much wasted time and effort.

Separate your belongings into piles of ‘keep’, ‘donate’ and ‘destroy in the fires of Mount Doom’ (or wherever you dispose of unwanted items.) Make the choices you need to in order to make moving possible and to prove to your friends that you don’t have a hoarding problem. No journey is remembered if the hero doesn’t encounter various hardships. That is, I had no plan going in and ran around destroying my apartment, and making more work for myself in general. I sometimes weep when I think of all the extra trips I made while moving just because I didn’t plan what I was packing and when to transport it. 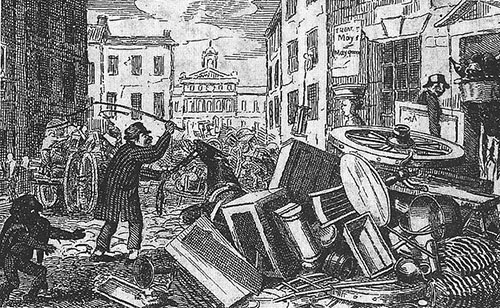 An artists' dramatic interpretation of my struggle.

It may seem like the most obvious tip, but you’re not always in what is considered a normal state-of-mind when you realize you have to pack and move all your worldly possessions over a weekend. So here we are, the end of the epic. I survived unscathed (even if I thought, at times, that either my spine or psyche was about to snap) and am here to pass a little wisdom I wish I had this spring. These four tips will do much to make your sudden moving experience a lot less harrowing than mine. Car photo credit to Peretzp on Flickr. Cartoon credit to H.P. Finn. Comic Annual of 1831.
AUTHOR
Tyler Fallon
Send Message